This is a temporary news alert. You are seeing this right now, because of the temporary breaking news listed below.

This is a place where you can find news about Nashville, TN and surrounding area's digital over-the-air channels whether it be through various sources or my own personal experience. I will try to give you the most up-to-date information on all the digital channels whether it be full power or low power stations. I hope you will find this site helpful and/or informative.

Several Links to donate your time and/or money

Are you sure you want to Delete this Comment?

In a previous post, I noted that W35DZ in Algood (near Cookeville) is moving up the tower and getting more power. Well, now W14EE (also in Algood near Cookeville) will be doing the same. Even though they will be going up 190ft, they won't be as high as 35 will be. They will also be going from a mere 0.2kw up to 15kw. I am providing an image of the broadcasting range that they have made and added with the FCC application. The black circle represents what the range looks like now, while the blue circle represents the range after they will make the changes. This range is not that detailed. Once the map on Rabbitears.info becomes available, I will add the link in this post. By the way, W14EE is the station owned by Gray, and it will be broadcasting what channels WSMV broadcasts. Until more news breaks, that's all for now. 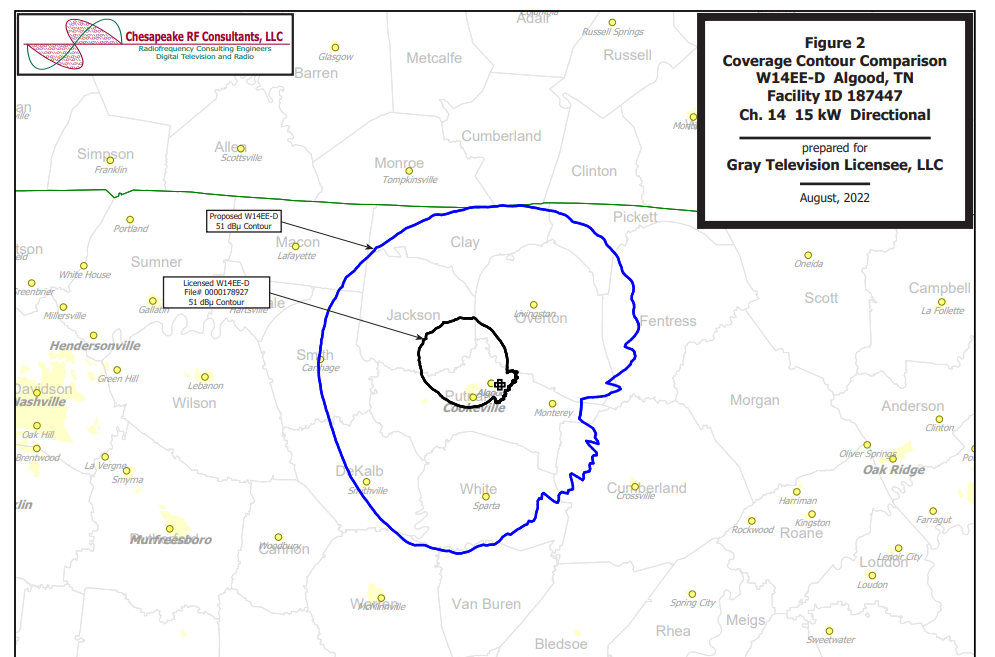 When I looked at the map I really didn't realize how much larger the coverage is when comparing the current one to the CP.

I looked at it. It MIGHT reach me. I'm in RED where it shows for McMinnville, and outside the contour. But if it shows WSMV 4.1, I'd be happy. Especially at night, and other times, when I lose WSMV RF 10.

It is good that Gray is putting the money on the table to use LP translators to fill in the WSMV coverage gaps. I doubt Meredith would have ever done so. The whole issue would have been moot if Meredith had participated in the channel repack and moved WSMV to UHF, in my opinion. But there may be regulatory and technical reasons why they couldn't.

I thought of that too why they could not move. Interference may have been an issue due to the nearest markets.

I am a Sumner County native but I now live on the West side of Cumberland County, and am really trying to get into the OTA thing. What will I need to do to pick this station. Thanks in advance and please be patient with this rookie.

Understood. If I was you I would go to Rabbitears.info and do a signal search for channels in your area.

I'm just outside of the noise contour. I do hope they plan to increase their signal at some point. But then again, I guess they need to be airing SOMETHING first. lol

Xmguy I know you said in the past that you either live in Mcminnville or around it. I think you should get channel 14 but I will check when they do eventually get their plans complete.

When I received WCTZ-LD as of now 35.7, which is LX, has no sound but there is picture with it and Closed Captioning works as intended. So I just chalk it up to a sub channel issue. EDIT. The channel came back with sound for a second but is back out for now but everything else is the same. I will not be able to update this by the time anyone sees it because the channel will go out.

I went to Smithville this early morning and tried to DX W14EE. I saw nothing. Not even a sniff. At home tropo was bringing ALL in at 100% and still not a whisper. I don't think they're on air. I could get W35DZ in Smithville. But nothing on 14.

What was on channel 35? I tried to get 35 where I live but the power was too low to receive because of tree coverage even though I was in the reception area.

Thanks for telling me. I never really knew what it was until you commented.

Wonder how much longer before Grey has W14EE on air?

I hope it is soon xmguy.

Thanks. Now if WTVF could get a repeater beyond the end of the band, and 3.0. As usual I have to rely on Huntsville OTA for NBC, and CBS at night. "sometimes" I can get RF 36 for WTVF. But during the day I get RF 5 decent enough.

*To add a brand new comment, please refresh the page.